Chicago 00: The Eastland Disaster is the first augmented reality (AR) mobile app experience developed by Chicago History Museum. This free app for Android and iOS guides users through the site of one of the most significant nautical disasters in U.S. history, the capsizing of the SS Eastland in 1915, which killed 844 passengers in the heart of downtown Chicago.

The app provides an AR Tour of the site; users stand roughly where photographers stood in 7 different locations and call up over 70 historical photographs and newsreel films of the disaster. Using the camera on the mobile device, the app superimposes historical media on the present-day scene, giving users a firsthand experience of history where it actually took place. 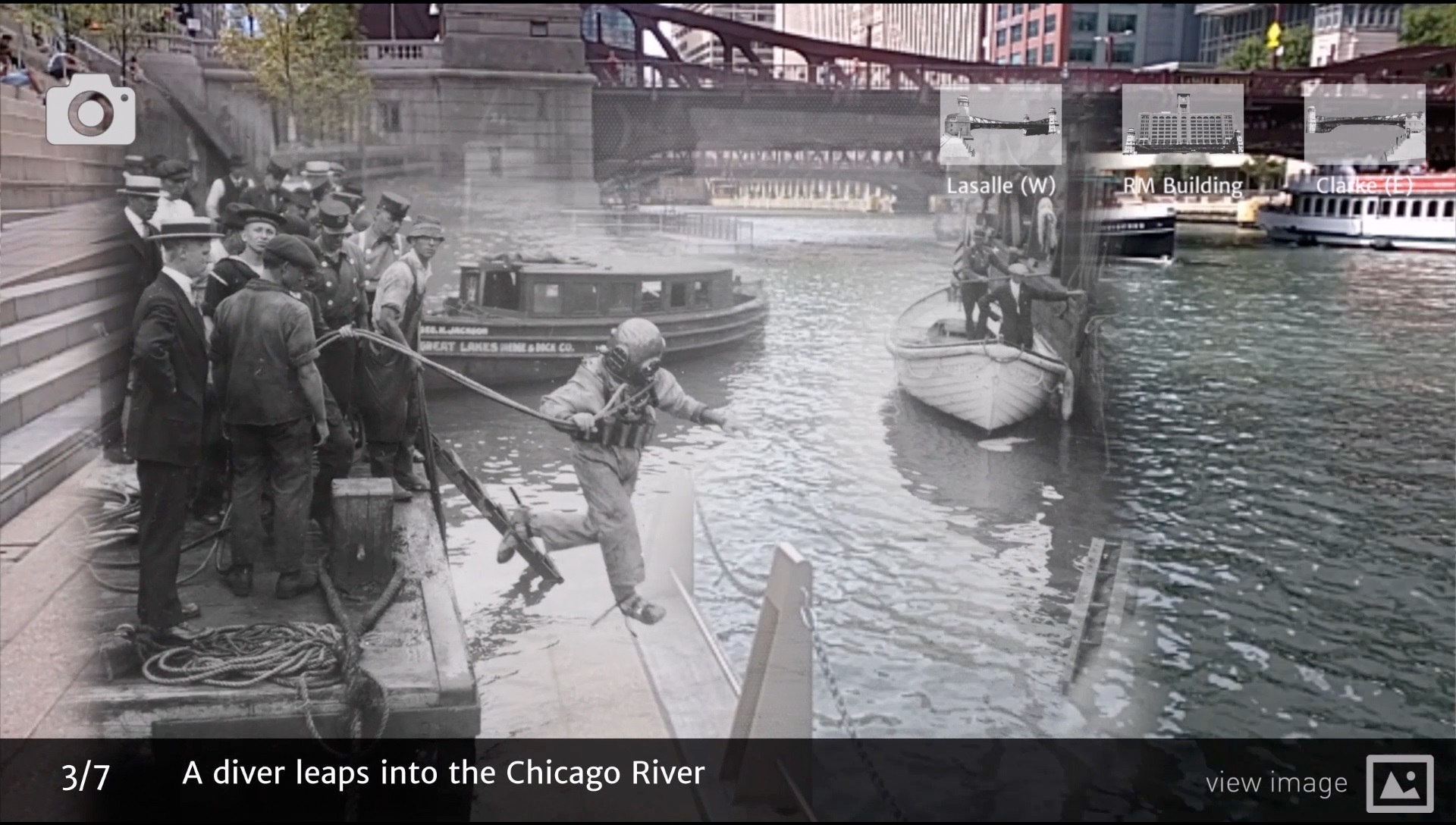 The app provides a powerful tool to facilitate tours of the site, guiding users through the story of the disaster, made all the more real by the appearance of site specific collection material on their mobile devices. The app’s release garnered considerable media attention, earning several minutes of airtime on the news program Chicago Tonight, and articles in both the Chicago Tribune and DNA Info.

The Eastland Disaster app is part of the larger Chicago 00 project: a series of site-specific, multimedia experiences that showcase the Museum’s archive. As part of the project, at least 500 rarely seen photographs from the Museum’s collection are slated for digitization, and will be made available to the public through the Museum’s digital collections portal.

Chicago 00 is a collaboration between Chicago History Museum and Geoffrey Alan Rhodes, a filmmaker and professor at the School of the Art Institute of Chicago (SAIC). Museum interns and SAIC students alike have contributed to the project, which is funded by grants from the National Endowment for the Arts and the Princess Grace Foundation.

Chicago 00 refers to the corner of State and Madison where the city’s street numbering begins, and the site of one of the project’s prototype AR experiences. In April 2015, a tour during the Museums and the Web Conference in Chicago led users to discover century-old images of Chicago’s downtown along State Street. This prototype allowed the team to test how the capabilities of AR shape user experience and served as a proof of concept for future projects, such as Chicago 00: The Eastland Disaster.

The sheer volume of Chicago stories and the depth of the Museum’s collection provide Chicago 00 with a wealth of diverse stories to tell in the future. The second installment of the project debuted February 2017; a set of virtual reality experiences telling the story of the St. Valentine’s Day Massacre. A narrated 360° virtual reality YouTube video guides users through the site and the story of the massacre while historical photographs, some well-known, some rare, tell this familiar Chicago story in a fresh and compelling way. Images of the site of the massacre can also be viewed as high-resolution, 360° panoramas in Google Street View.

Future installments of Chicago 00 may include the 1933 World’s Fair, a Riverwalk tour, a skyscraper innovations tour, the 1960s blues scene, or the Great Chicago Fire. Whatever the story, Chicago 00 is an innovative way to make history accessible in the places where it happened.