Learn how the Monterey Bay Aquarium became the first organization of its size to develop “by teens, for teens” social media accounts. With a focus on co-creation, the Aquarium’s education and marketing departments partnered with teens to build a social media program. Teens developed their own brand, chose social media platforms, and created their own filters for posts. They’ve worked since June to build and maintain an optimistic, conservation-focused teen voice. As new teens enter the program, experienced students help train their peers. Follow their progress on Instagram @MontereyBayAqTeens, Facebook @MontereyBayAqTeens, and Snapchat @MontereyAqTeens. Come hear from educators, teens and our evaluator about how our experience can be translated to your museum. Let teens be your social media voice!

In June 2016, the Monterey Bay Aquarium did something that strikes fear into the hearts of most organizations of its size: we handed our brand over to teens.

After months of focus groups and cross-departmental planning, we allowed a group of teenagers to develop social media accounts geared toward other teens, all under the Monterey Bay Aquarium name. The pilot program, which took place from June to November 2016, was evaluated by Elin Kelsey, PhD, who reported eight key findings:

With the goal of supporting other museums considering a similar program, we outline what we did, how we did it, and what we learned.

Initially, senior staff at the Monterey Bay Aquarium were interested in a teen-created podcast series targeting other teens. In June 2015, Elin Kelsey led a focus group of teens within Aquarium programs to learn more about the types of media they turn to for conservation and science information. Results from the focus group made it clear that social media would be a more effective medium for engaging teens.

Education staff at the Aquarium decided that a teen social media opportunity would fit well within the existing Teen Conservation Leaders (TCL), a highly competitive teen volunteer program at the Aquarium. Teens apply to join TCL, and about 60 are accepted every summer. These TCLers undergo 80 hours of training in Aquarium culture and marine science, with a focus on youth development. After this, they volunteer for 100 additional hours throughout the summer—most volunteer alongside Aquarium guides, interacting with guests in the Aquarium. A small group also volunteers as camp counselors for a middle school summer camp.

After their first summer in TCL, teens have the option to join one of several teen volunteer tracks within the Aquarium. These include opportunities such as volunteering at Aquarium sleepovers and supporting husbandry. Past evaluations have shown that most TCLers develop a strong tie to the Aquarium culture, as well as to the inclusive, youth-development-focused culture of the TCL program. Because of this, the Social Media Track was developed as an opportunity available to students who had already completed their first summer within TCL.

Our evaluation later found that the common experience of TCL was integral to the success of the Social Media Track. In the words of one teen, “I think by being in TCL—camp track, guide shift, whatever it was—you learned the way of the Aquarium and what their brand was. If you don’t know the basic brand, how are you supposed to elaborate on it?”

From the outset, there were two main goals for the development of the TCL Social Media Track—it would be developed by the education and marketing departments collaboratively; and the teens would be co-creators of the track.

Aquarium educators took the lead on developing the track beginning in January 2016, in close collaboration with the Aquarium’s marketing and communications department. In June 2016, a group of five teens began volunteering in the Social Media Track, under the mentorship of a paid teenage program assistant, who was a TCL alumnus.

After their initial training week, teens met for one day each week throughout the summer to collect multi-media assets, create social media posts, and hear from social media experts. They created posts for the entire week in that meeting, and scheduled them to be posted on the appropriate date, posting once each day to Facebook and Instagram. The students created Snapchat stories only on the dates when they met. The students continued once school started, meeting for half a day every other Saturday to create their posts. During the school year, the students posted less often; every other day on Facebook and Instagram, and once every two weeks to Snapchat.

During this time, the teens focused on two specific social media campaigns. One was around Proposition 67, a proposed statewide plastic bag ban that was up for a vote in November 2016. The teens were tasked with developing a campaign about the proposition for other fellow teens—many of whom couldn’t vote—to highlight what teens could do for this issue. The second campaign focused on the Teen Summit, a conference at the Aquarium for teens from around the state who planned to embark on a school-year-long conservation project. We felt these campaigns were important because they focused students on a specific goal, with a specific end date. Social media is a 24/7/365 affair, but we wanted the teens to feel some sort of closure after their time in the program was done. These campaigns served as that closure.

During their meetings, students first enter the Aquarium and surrounding outdoor areas to collect multimedia assets. Each student is assigned an iPod for the duration of the track to use for this purpose, though some choose to use their own high-end cameras. While the students are taking images and videos, one pair of students creates and posts a Snapchat story. Then, students return to their meeting space, where they upload their assets to a shared Google Drive folder. They all view the Snapchat story and decide whether anything needs to be deleted. The teens then sit around a conference table while one person clicks through the images and videos in the Google Drive folder, using a computer connected to an LCD monitor. The students decide collaboratively which assets will work best for either Instagram or Facebook and move the assets that make the cut into a new Google Drive folder.

After they’ve reviewed all the multimedia assets, students work in the same way—with one person clicking through the chosen images/videos, while the teens sit around a conference table and collaboratively create captions for each asset. While generating captions, teens take into account upcoming holidays and trending hashtags. Students use a template to record the caption for each post. This template prompts them to explain how the post connects to their brand, platform guidelines and content guidelines.

The program assistant, in addition to acting as a mentor, took on many additional duties, including collecting, analyzing, and reporting out metrics for the teens’ social media accounts. The program assistant also helped develop a regular meeting agenda template, which allowed a different student to lead the meeting each week. Our goal was to make the adults in the room unnecessary for the success of the track. 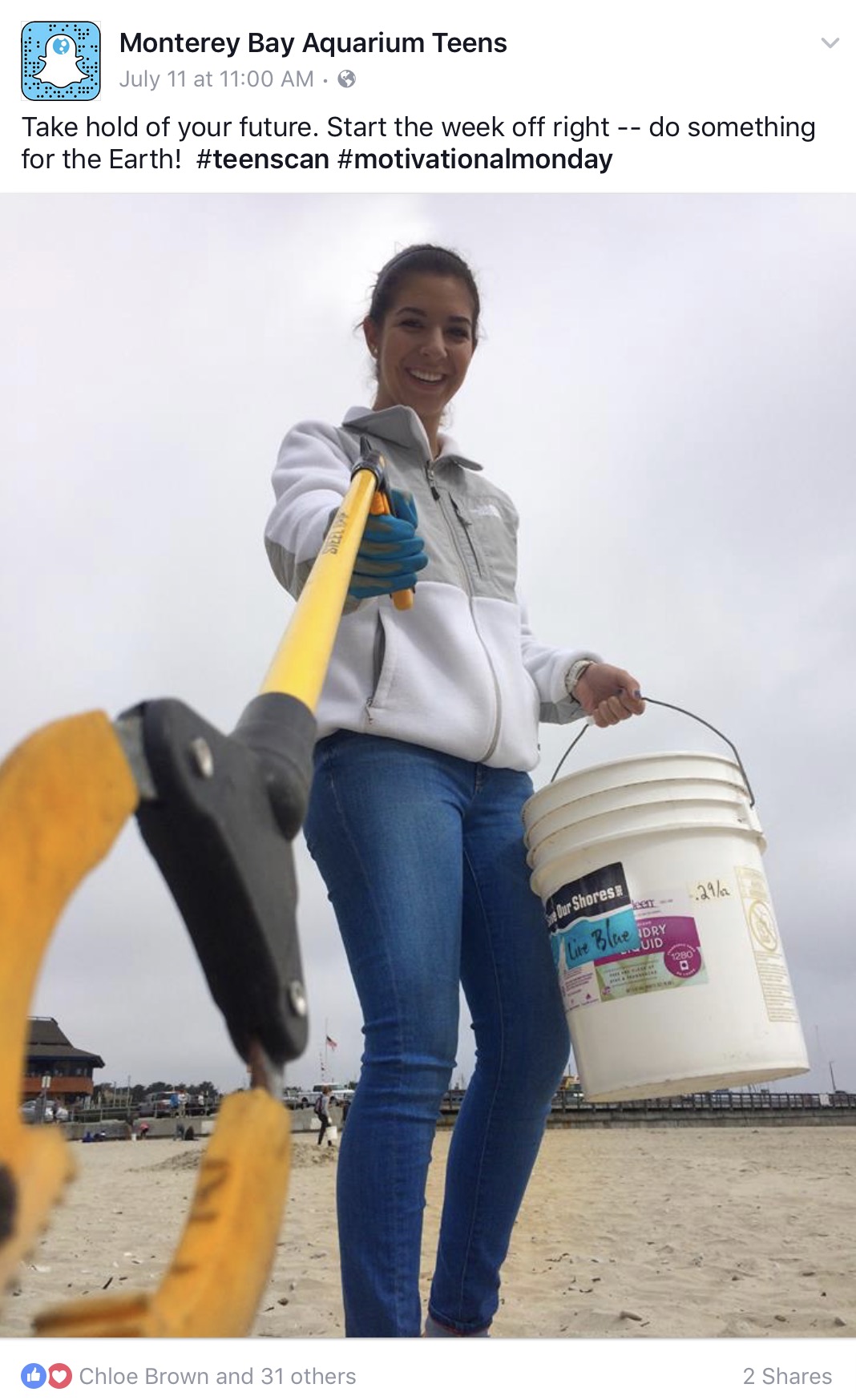 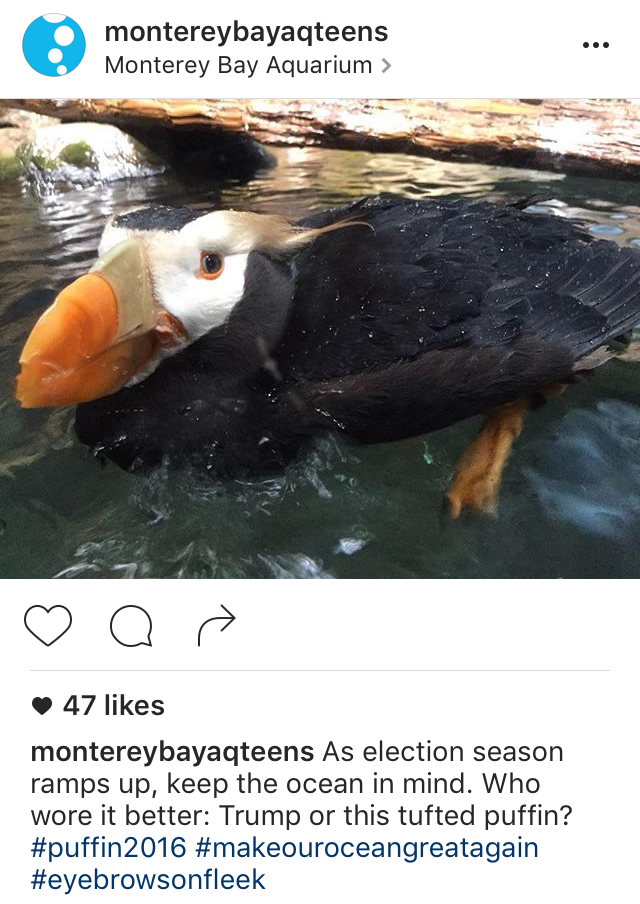 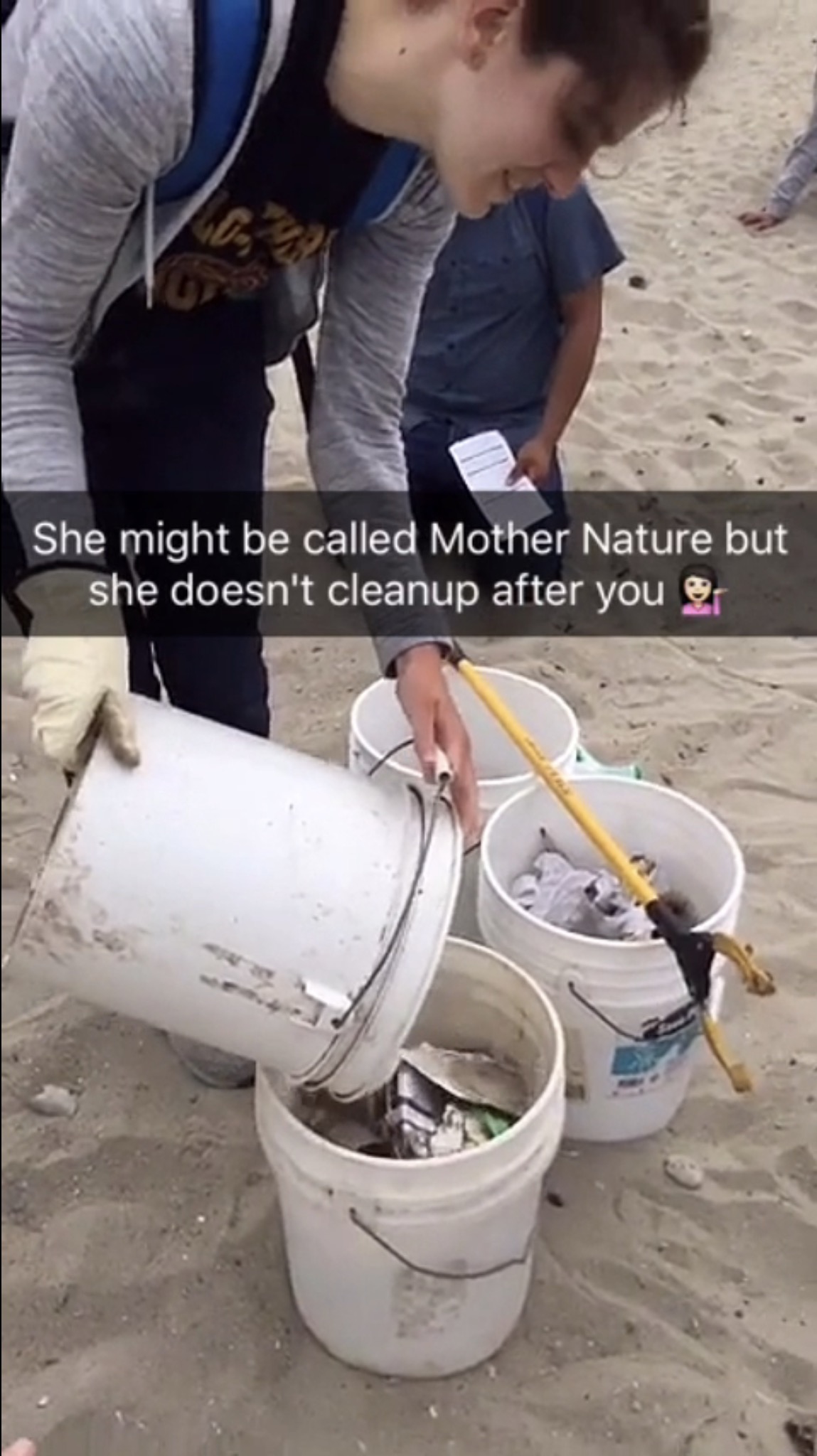 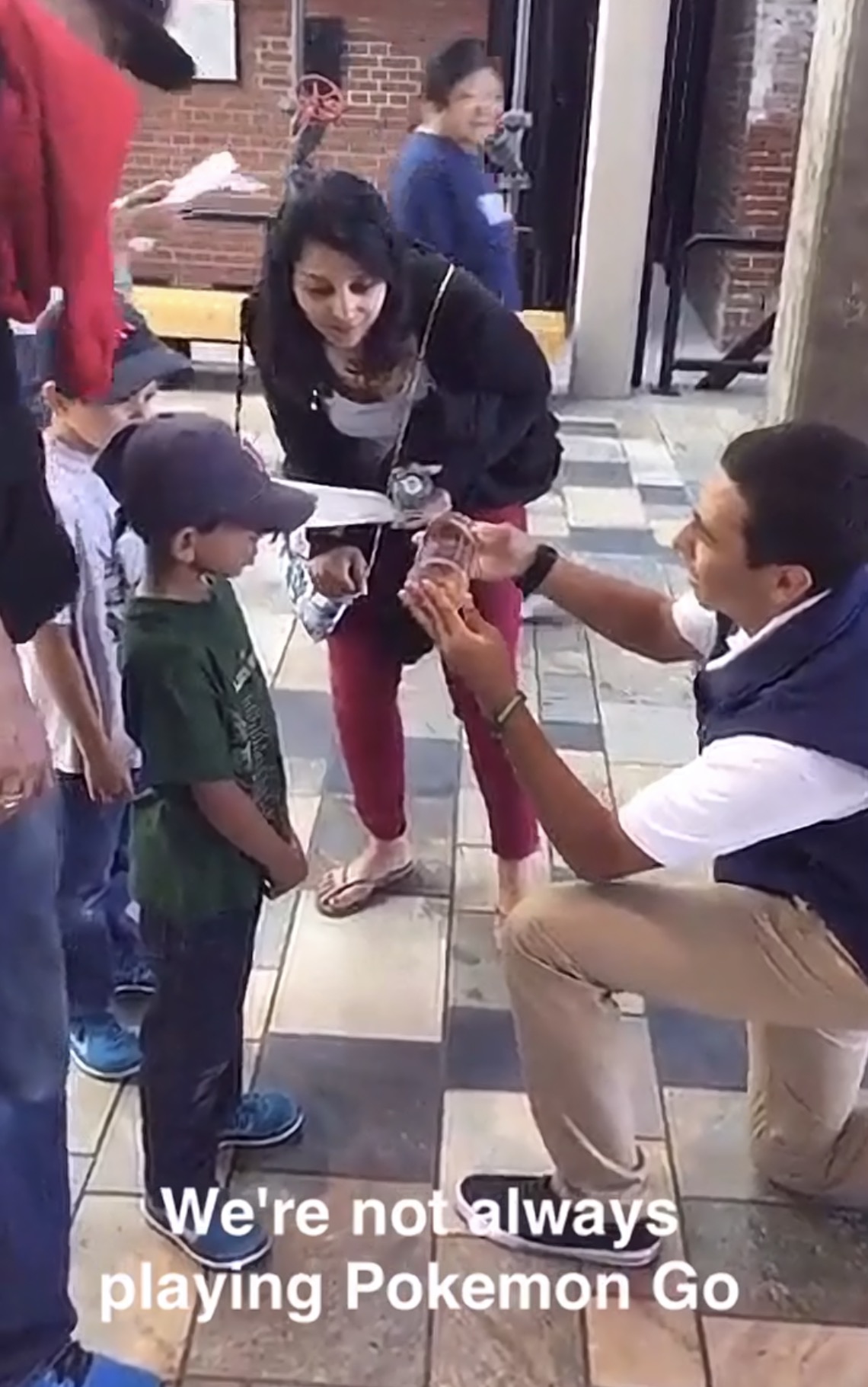 Figure 3: sample posts by the teens

Our evaluation showed that the TCL Social Media Track pilot was a success. In developing the track, we hoped that it would serve to empower students and to increase their knowledge about conservation and marine animals. The evaluation showed that the track did. But the results also included some surprise benefits. For example, the track served to improve the perception of teens, and their abilities, throughout the Aquarium.

A strong sense of collegiality also emerged between the teens and the staff. “I really enjoyed the relationship that we got to build with the teens,” says Daphne Karpel. “One of our legitimate concerns going into this was time. But I almost wish that somehow the office space could have worked out where they could have worked near us. The dynamic of them and us and the ideas that they had and the things they were interested in doing and talking about was something I really appreciated.” Patrick states it succinctly: ‘The teens definitely felt like colleagues.”

After the pilot, we extended the track to a permanent, year-round opportunity for TCL students who have completed at least one summer in the TCL program. We held a strategic planning meeting, where the teens in the track made decisions about how the track should proceed. They decided to create three cohorts for each year—one from June to August, another from September to December, and a third from January to May. Students chose these timeframes to ensure that teens involved in sports or other seasonal commitments could have an opportunity to be part of the track. New teens joining the track are trained by track alumni (with education staff oversight) in June, September, and January. Teens can remain in the track from season to season or join just the cohorts that fit within their schedules.

Since the pilot ended, the TCL Social Media Track has continued. New students joined the track in September and January, with track alumni training each new cohort. Because we were unsure if the track would continue past the pilot, scheduling and recruitment decisions were made hastily, which has had a negative impact on attendance. The track is still moving forward, but we held a second strategic planning meeting with students in January to make adjustments to bolster attendance.

At that meeting, students decided to stop supporting their Facebook account and to focus more intensely on Instagram and Snapchat. From the start, students in the track approached Facebook differently—because most teens don’t use the platform regularly, their Facebook posts were designed for parents and teachers of teens. Their goal was to break negative stereotypes about teens in the eyes of those adults. However, due to Facebook’s algorithm and the limited number of posts students were creating (one every other day), they weren’t getting much visibility on Facebook. The teens felt more comfortable creating Instagram and Snapchat content, and their metrics on those platforms were consistently strong. They felt they had a unique voice to offer on Instagram and Snapchat and that, by focusing on those platforms, their posts would be even stronger.

The teens also decided to post more frequently to Snapchat, with a different Social Media Track teen taking on the platform each week to tell a sort of “week in the life of a teen” story.

Education staff also made the decision to adjust from meeting every other week for a half-day to once a month for a full day. We hope this schedule will allow us to offer students more professional development opportunities, such as field trips and guest speakers. These opportunities were afforded to the summer cohort, but were lacking for the school-year students.

We are currently planning for new cohorts in June, September and January. We’re hopeful that with long-term planning, we can ensure the continued success of the TCL Social Media Track.

Although we know that teens interact through social media in large numbers, there’s a dearth of information about how they interact within social media and how they present themselves differently on different platforms. We hope our experiences can contribute to that field of work.

Research on developmentally appropriate conservation messaging also played a large role in the development of this program, and is exemplified in the following works:

Palmer, J. A. (1993). “Development of concern for the environment and formative experiences of educators.” The Journal of Environmental Education 24(3), 26-30.